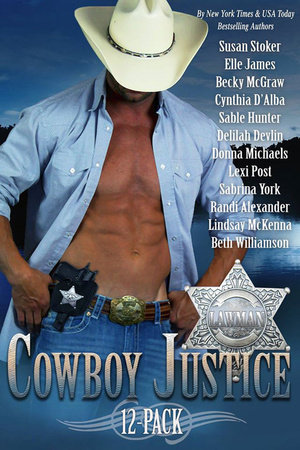 Justice for Laine by Susan Stoker – What began as a favor turns out to be fate when Laine meets sexy Texas Ranger Wes and falls for him.

Justice Burning by Elle James – Hard-nosed sheriff’s deputy, Nash Grayson, places his family and hometown in danger when he rescues, Phoebe Sinclair, Dallas debutante and desperate runaway bride with a secret hiding in the trunk of her stolen car

Laying Down The Law by Becky McGraw – Doctor returns to hometown when mother takes a fall and falls harder for new town Sheriff…her first love.

Texas Justice by Cynthia D’Alba – First-term Sheriff is torn between duty and love when sexy Chief of Surgery is accused of medical malpractice and homicide.

Cain’s Law by Delilah Devlin – Lawman, Cain Whitfield, discovers the shy brunette he’s been flirting with is a former mob boss’s girlfriend when her cabin goes up in flames.

Cowboy’s Best Shot by Lexi Post – A cowboy veteran who’s lost so much. A bartender who never had it to begin with. Is this their best shot?

Protect and Serve by Sabrina York – He’s vowed to avoid his high school crush, but his duty demands he protect her from a growing menace.

Badge and a Saddle by Randi Alexander – Detective Rex Tarrow is sworn to protect Astrologist Dr. Mina Cooper, but will she get them both killed?

Blind Sided by Lindsay McKenna – Dark family secrets stand between the sheriff and the woman he loves from afar. Can he expose the treachery? Win her hand?

Lazarus by Beth Williamson – Being a Graham isn’t easy and it’s about to get a lot harder for one stubborn lawman and the woman who still owns his heart.