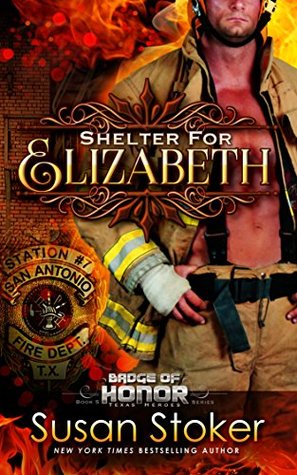 Elizabeth Parkins lived through a nightmare come true—getting kidnapped by a serial killer. Seeking a fresh start, she moves to Texas, but escaping her demons proves impossible when she’s too terrified to leave her own apartment. A small, accidental fire sparks a coping method she’d never expected, and brings an amazing man to her door.

Firefighter Cade “Sledge” Turner’s idyllic life ended the day his sister was kidnapped. Now he knows firsthand that tragedy can befall anyone, at any time. Meeting Elizabeth on the job was a gift. Cade can envision spending his life with this woman. He understands what she’s been through, is willing to help her heal…though even Cade is unaware of Beth’s new secret obsession.

As Beth takes steps to help herself heal, and Cade attempts to earn her trust and prove his own, they’re both about to be tested—in a way that could see everything they’ve worked for go up in flames.

* Shelter for Elizabeth is the 5th book in the Badge of Honor: Texas Heroes series. Each book is a stand-alone, with no cliffhanger endings.