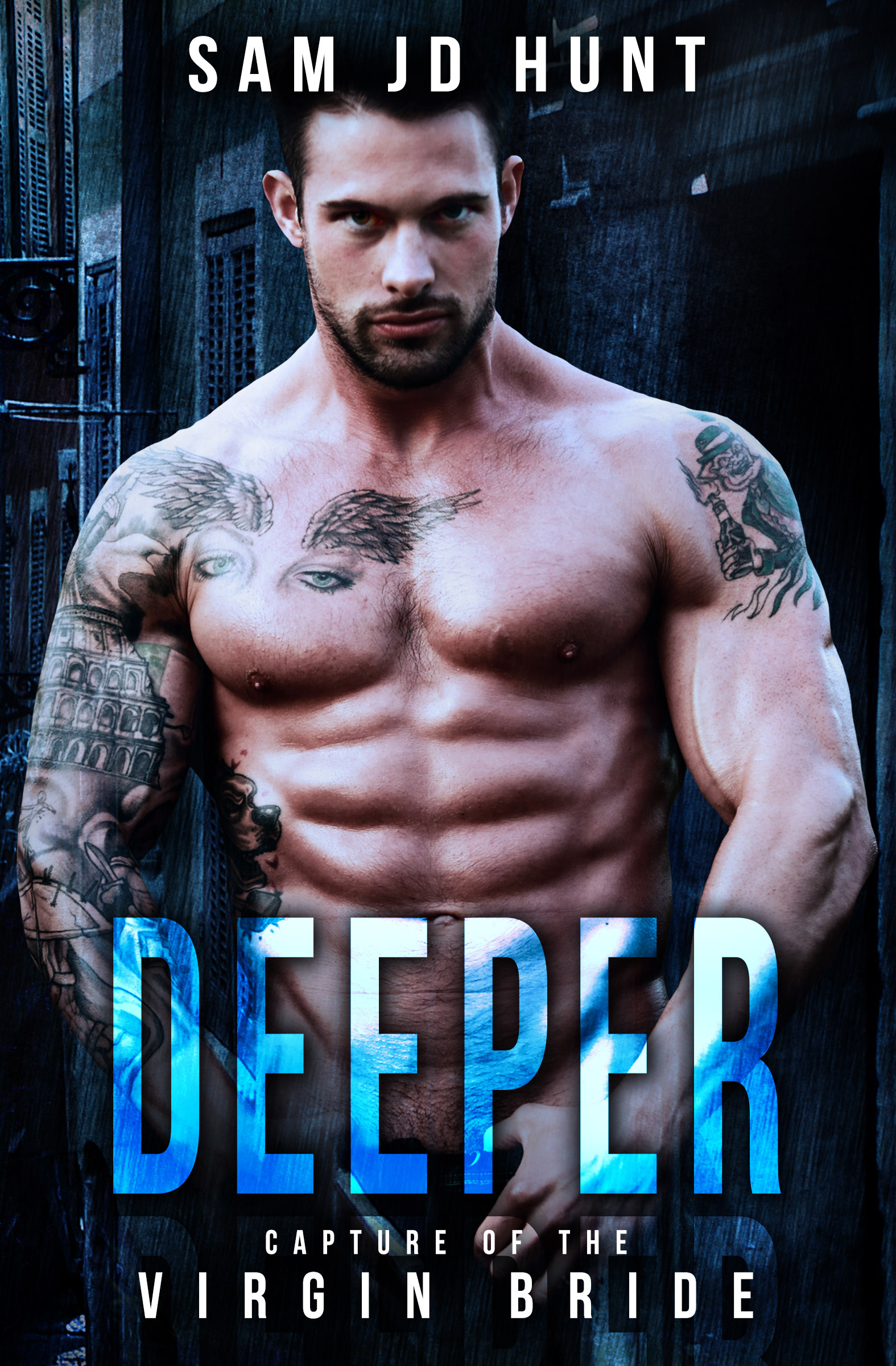 A gentleman with a taste for the exotic,
A virgin bride thirsty for more,
Two unlikely lovers are swept DEEPER.

Sir James Morgan didn’t plan to end up with a virgin for his pet, but when his brother, Henry, the notorious pirate captures Lucinda on her wedding day, their lives are forever changed. Sweet Lucinda would make the perfect novelty for James, but she isn’t suited to be a pet.

Despite the sensual fire they share, Lucinda’s fierce resolve prevents her from submitting to her captor or any other man. As they endure an adventure wrought with danger, deceit, and desire, two unlikely lovers are swept deeper.

“So you really are a virgin?” the dark man on the three-legged stool asked her. The air in the tiny cabin was dense and heady; Lucinda inhaled deeply, allowing the salty, humid air to fill her small lungs. Her chest fluttered as she exhaled the moist breath in a slow sigh.

“Y-yes, sir,” she stammered, taken aback by the sound of her own voice as it broke the extended silence between her captor and herself.

The man wiped his long fingers across the crackly sandpaper of his late afternoon beard. Sir James Morgan hadn’t intended to end up with a virgin as his pet that day—the plan his brother, Henry, had proposed was to have a shockingly different outcome. James stroked his scruffy chin, pondering what he would do with the virgin bride he now possessed.

“Did John ever take any liberties, of any kind, with you my dear?” he finally asked. Lucinda, sitting on the hard wooden floor of the ship, pulled her legs up to her chest and hugged them against her. The floor swayed to and fro as the pirate ship, the Mayhem, began its journey from Santo Domingo. James waited impatiently for her to answer his indelicate question; his dark eyes bored into her.

“Er, well, ah…no. No, sir, I mean, Mister Devore didn’t care much for me, I don’t think. He never touched me—not even a hand holding occurred between us. The marriage was a payment from my father.”

James stood up and walked toward her, a lantern swinging from his right hand. “How old are you?” he barked, his free hand reaching down to raise her chin up so he could see her better.

“Eighteen, sir.” He forced her chin from side to side, examining her flawless alabaster skin. The lantern struck the ground with an abrupt thud as James squatted in front of Lucinda, his now-free right hand reaching up to grasp a fistful of her silken golden tresses.

“The color of afternoon sunshine,” he muttered to himself.

As his fingers adored her innocent beauty, his mind wandered to earlier that day. “My brother, the dreaded pirate Henry Morgan, planned to give you to the crew to do with as they pleased before throwing you overboard,” he informed her, his voice low and menacing. Lucinda shuddered against the harsh man’s thumb as it pulled at her lower lip.

James examined her teeth, small and white, and continued softly, “However, he has given you to me to do with as I please.” His index finger slid over her pink tongue, her velvety mouth instinctively suckling it. She was so beautiful, so exquisite, so pure—she was the finest thing he’d ever seen. James stood, tearing himself away from Lucinda.

“You’ll be examined later. If you’re lying to me, if your purity is not intact, your deceitful **** will be the first piece of you fed to the sharks.”

As James slammed the door shut behind him, Lucinda sobbed in fear. She had her secrets…and her new master would soon find them out. His touch had awakened in her a fire that burned deep, a desire that had never been fulfilled by her own small hand. This dark man sparked the caldron within her, and it burned hotter, the need deeper, than ever before.

Hunt’s next release was co-written with her husband. Dagger: American Fighter Pilot is a steamy contemporary romance, which follows a squadron of fighter pilots as part of the American Fighter Pilot read-in-any-order series. Following the release of Dagger, Hunt released the much-anticipated MMF/Bi/Ménage erotic adventure, Taken by Two which became an international bestseller, closely followed by its sequel, Torn from Two. Next, Hunt plans to release Santino: The Eternal, the first book in her paranormal series, The Eternals. When not writing, Hunt enjoys travel, community involvement, spending time with friends and family, and hiking. She spends her days writing and trying to answer the age-old question: is it too late for coffee or too early for wine?

The Hunt for Eros