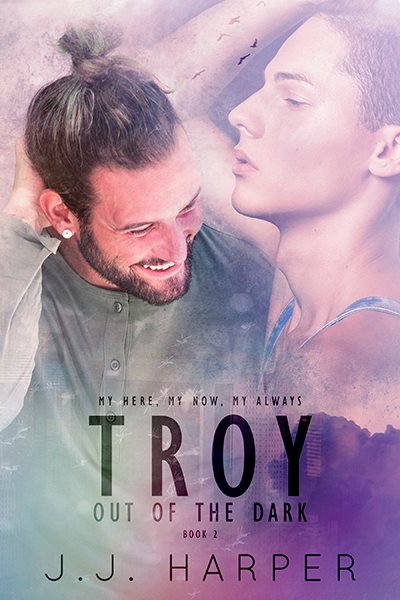 Troy Out of the Dark by J.J. Harper

The second book in the Troy Duology Rafferty ‘Raff’ McMahon—beaten, broken and cast out of his home at eighteen—turns to his aged aunt who helps him become a new man with a new name. Ten years later, a successful photographer with an edge to his work everyone seems to want, a call that will set his life on a roller coaster ride comes through. Troy Ballantyne, CEO of De’ath of You Enterprises, wants to meet him. Mesmerized by the voice coming down the line, Raff immediately agrees to the meeting.

“Hi, can I speak to Rafferty McMahon?” A deep and seductive voice asks.

“You are.” My reply is short, who the fuck is this? I’m having a horrendous day and, however hot this guy sounds, I want off my phone.

He sets about researching, not the company but the man himself; captivated by Troy’s images, Raff is excited to meet the man behind the sexy drawl.

When Troy sets up a meeting with up-and-coming photographer Rafferty McMahon the last thing he expects is to be drawn to him. A connection he has already experienced once before, his heart beats a little faster. Is this for real?

“What do you want, Troy?” His voice, low and gravelly, sends shivers over my body.

“I don’t know. We have only just met but from the first moment I heard your voice I haven’t been able to stop thinking of you.”

The feeling of ownership overwhelms Troy and as much as he wants to stay locked away with only the memories of Franco, he can’t fight his feelings for this handsome man.

Is this the man Franco told Troy was waiting for him? Is he going to be the great love of his life? Will both Raff and Troy be allowed to be with their one true love, or is there someone out there ready to tear them apart?

This book is a gay M/M romance and include sex between two men, and is recommended for over 18’s. It is book two in a duology and follows on from Troy – Into the Light available now

Troy’s story hits on a hard subject that may act as a trigger for some. Reentering the building after watching Raff speed out of the lot, I walk back to the room. My head is a mess; what the fuck just happened? Ben organizes the wrap-up of the afternoon, talking quietly to the veterans as they gather their stuff. All but one of them. The man who blew the whole afternoon to pieces. He merely stands there, dazed.

Racing over to him, I stop a couple of feet away. His head lifts and, apart from the pain and sadness in them, I see the same green as Raff’s. Tipping my head to one side, I see the same high cheek bones and strong jaw, only this time not hiding under the beard I love so much.

“What did you do to him?” The words are out of my mouth before I can control them. I watch him recoil as if I’ve struck him.

“I broke him.” He whispers to me before turning away and trudging to the door. Ben calls out to him but he waves and carries on walking.

Spinning on my heel, I glare at Ben who instinctively throws up his hands. “Whoa, Troy, back off!”

“Who the fuck is he? I want a name and address. I want his fucking history and I fucking want it now! I want to know what the fuck he has to do with my man.” I storm out again and head out, but where to go? Raff drove here today; he knew it would be a long day and he wasn’t happy leaving the dog.

Digging up my phone, I call him but it goes straight to voicemail; I knew it would but I hoped not. “Raff? Raff, sweetheart, talk to me. Please, honey, talk to me.” Dropping the call, I slide down the wall I leaned against and rest my head on my arms as they lie across my bended knees. This is bad, this is really bad.

A hand on my shoulder makes me lift my head and I discover Ryan standing at my side. “What happened, Troy? What can we do?”

“I have no fucking clue what to do, but that man hurt Raff so badly that he ran.” I push myself up from the floor and run my hands through my hair, trying to clear my head. “I need to get home, I haven’t got a car here.”

“Take mine, I drove my own today. I’ll go home with Nico.” Ryan hands over his keys and smiles sadly. “It will be okay, Troy. You two have something too good, it’s the real thing. I don’t think he’ll throw it away.”

As I turn to leave, Ben walks up to me. He looks grim but I think he has some answers. “Tell me, Ben. Tell me what that man has done.”

“His name is Corrigan Deschamps. His father is Ferdie Deschamps, the senator. Corrie left home at eighteen and joined the military. By the sounds of it, he has severed all ties with his family and hasn’t been home since. He’s a good man, Troy, I don’t know or understand what has just happened and Corrie hasn’t said anything. Maybe you should speak to him, he may explain himself to you. I’m sorry, Troy.” Ben tries a weak smile but I can see his heart isn’t in it.

“Really? Senator Deschamps? That man is a homophobic asshole, all bible quotes and shit. I’ll need this guy’s address and contact number, Ben. But I have to go home now. I need to speak to Raff, I can see if he can explain this.” I rush out, knowing I’ve wasted too much time here. Jumping into Ryan’s car, I’m on the road in no time. Traffic is heavy but Ryan’s Aston Martin is more than capable of clearing through the cars. It’s ten minutes later when I drive up to the house, but there is no truck. So, no Raff, shit!

I pull out my phone again and call his number but it goes to voicemail again. I feel sick and know I’m half a second away from breaking down. “Raff, talk to me. Please. I love you. Don’t be another man I lose; I can’t survive this again. Please, come home.” Sobs build up in my throat and tears fall freely down my cheeks. “Come home, sweetheart, we can deal with this together.”

If Raff is related to Corrigan, and they look so damn similar he must be, then there is no wonder he freaked out. Raff would have been subjected to his father’s hateful diatribes for years.

I wish he would answer his damn phone, he promised he wouldn’t leave. I need him, I know I won’t survive him turning away from me.

Troy – Into the Light Book One

Book One in the Troy Duology Troy grabs his bags and, shoving in as much of his belongings as he can, he clambers out of his bedroom window. He can hear the shouts and arguments starting up and his name being called. Not able to face his parents, Troy runs away.

How can one chance sighting turn into a love affair you never thought existed outside of a book? That one glance that altered my whole life?.

Leaning against the wall of the club, Troy’s eyes are drawn to the dark-haired man dancing fluidly with another man. Their eyes meet and Troy’s life changes in the blink of an eye. Inexplicably drawn to each other, they meet on the dance floor. Tremors course over Troy’s body as the handsome stranger touches him.

“I’ve been waiting for you. I don’t know how or why, but I know that you are mine.” As he leans in, he whispers in my ear, “I’m Franco; I am the man you’ve been waiting for, too.” Troy’s life alters irrevocably in that instant as he falls for the handsome, Italian man.

As they build their life together Troy and Franco discover true love, a love so deep they can’t be apart.

I hold his head against my body and, no longer able to hold back my emotions or my words, I stutter, “I love you,” into his hair as my lips cover his head with kisses. “I love you also, Troy. I never knew such a feeling was possible.” Franco whispers against my chest as I hold him.

When illness strikes, Troy has to discover a new part of himself as he struggles past the pain. A new, stronger, braver man emerges, taking his life in his own hands.

This book is a gay M/M romance and include sex between two men, and is recommended for over 18’s. It is book one in a duology and ends with a lead up for book 2 Troy – Out of the Dark

Troy’s story hits on a hard subject that may act a trigger for some. I’m J J Harper or Jess to my friends and family. I have a love for hot steamy love stories and write m/m and m/f romances.

I write from my heart more than my head, I sit in my living room typing away, with my dog and a warm fire in the winter, and in the summer, I sit in the garden soaking up the sunshine tapping away on my laptop, still with my dog.

I’m a mother and a wife but tend not to live by those definitions, I have still yet to work out how to act my age!! Lol. And I have no intentions of growing up or growing old gracefully, I am a fiercely loyal friend and love my family and friends hard.

I live in the UK in the quiet Lincolnshire countryside along with my husband and my dog, it’s a peaceful existence which balances out all the crazy that goes on in my head. What would the neighbours think of me???