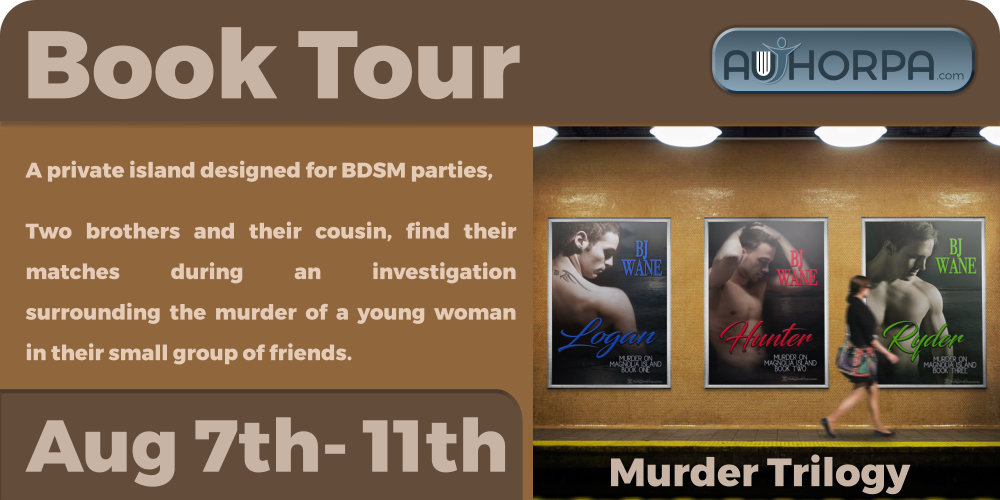 Logan : She’s the girl next door he’s always protected.  He’s the man she’s always wanted.  Will the threat of a killer finally get them on the same page? Hunter : His saw beyond the scars and limitations to the neglected need inside her, but could she learn to trust again before she caught the attention of a murderer? Ryder :  It took seeing another man come on to her and a risk to her life to open his eyes to what had been right before him all along

Two brothers and their cousin, find their matches during an investigation surrounding the murder of a young woman in their small group of friends.

Melanie’s startled squeak reverberated around the yard when Logan snatched her arm, sat on the lounge and hauled her over his lap.  Before she had even grasped the fact he was actually going to spank her, he had her short skirt flipped up and the matching tights yanked down, baring her butt to his gaze and the warm afternoon sun.  Humiliation heated her face and tightened every muscle.  She’d come over to be supportive and this was how he treated her?  Then the first sharp slap resonated throughout her body, the slight sting more surprising than painful. Instant, searing arousal dampened her sheath, the warm waft of air sliding across her buttocks adding even more heat to the burn between her legs that was at odds with her mortification.  How could she be embarrassed and excited at the same time?

She didn’t have time to ponder her contradictory emotions further as he landed a stinging slap on her right cheek that sent her legs kicking up and her head swiveling around.  “Ow!” she exclaimed in automatic response to the much sharper pain.

“Be quiet, unless you want the neighbors to hear you.  You’ve been asking for this for a long time.  Deal with it.”

Logan pinned Melanie’s shoulders with his free hand and proceeded to pepper her buttocks with a quick volley of smacks, keeping them light, just hard enough to sting a little.  She gritted her teeth, needing to prove to him she could take whatever he dished out, could be whatever he needed her to be in order to get and keep his attention.  Her lip throbbed from biting it against the barrage of smacks he covered her entire backside with, some hard enough to urge the clenching of her buttocks in response, others just light taps that sent a zing of pleasure arrowing down between her legs.  The discomfort and embarrassment were more than she had expected when watching him all those years ago, but the budding arousal blossoming with each swat was everything Melanie knew she would feel from having his hands on her.  The combination of contrary sensations seemed to work together in building her response to a feverish pitch.

The unexpected smack aimed at the sensitive skin of the under curve of her buttock jolted her into pleading for something she couldn’t put a name to that lay just beyond her grasp.  “Logan, please.”  Shifting her hips against his rock-hard thighs elicited a gush of moisture from her core and an instant wave of tingling pleasure at odds with the pulsing heat encompassing her butt.