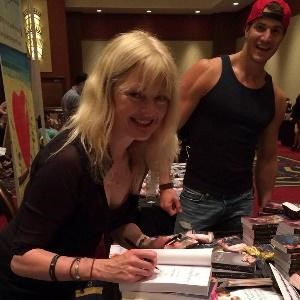 What genre/genres do you write? Contemporary romance, NA, military romance

Tell us a random fact about yourself: I’m a really good shot!

Where is your dream holiday destination? Hawaii

What is your all-time favourite food? Chocolate!

What is your favourite Take-Away choice? Chinese

Tell us your favourite sweets/candy?  Any kind of chocolate – I’m not choosy!

If you like to cook, which dish do you enjoy preparing and cooking yourself? I don’t like cooking much, but I make a mean spicy tuna vegetable pasta bake.

Do you enjoy baking? If so what is your favourite food item you love to bake? Again, not for myself, but I love making birthday cakes for my friends. I’m not great on decoration, but they taste good. Chocolate and blueberries is popular!

What is the one dessert you can never resist?  When I go out, I rarely have much choice of dessert as I’m a coeliac. Usually I’m just told I can have ice cream. But in a restaurant that caters for gluten-free, I’m a kid in a sweet shop, not being able to choose, because I’m not used to having a choice. Usually it’ll be something chocolate based, but I do love a good panna cotta as well.

Which of your book characters has a lot of you in them? Honestly? All of them. They all have different aspects of me. But I think most writers do that, whether they admit it or not LOL

Who so far, has been your favourite character to write? You’re asking me to pick my favourite child! There are some voices that I find it very easy to slip into, like Sebastian from the EDUCATION series. Not that he’s necessarily a favourite, just the voice that comes to me the most easily.

If you could be any character from any book, who would you be and why? None of them, because I put them through the mill! Although it would have been to be a character in the TRAVELING series and be part of a traveling carnival. I’d probably have to make up an act with my little dog Pip. Although I’m not sure she’d put up with me telling her what to do all the time. And she’s a wee bit old. But we could sit in the trailer with Bojangles the monkey, and Socrates the parrot and have some fun times.

Is there one of your book characters that you have disliked or do you love them all in some way, even the bad guys? The Russian mafia boss Sergei in SLAVE TO THE RHYTHM. He was pure evil with no redeeming qualities. I wrote him because I got a little tired of mafia stories where the hero kills people during the day and carries shopping bags for elderly widows on his day off. Not this character – he enjoys the fear and pain of others, feeds on it. He was vile and if I ever met him, I’d be terrified.

What car do you drive? Ford Fiesta

What is your dream car? DB9

Who is your current eye candy/crush? Aljaž Skorjanec

Which celebrity did you have a crush on as a teenager? Keanu Reeves

What is your favourite movie of all-time? Point Break/Independence Day/Sense and Sensibility

Who is your favourite band/singer of all-time? Bowie

It’s no secret that I have friends in the military, specifically EOD which stands for Explosive Ordnance Disposal – bomb disposal officers. They are extraordinary men and women, and I understand a little about the cost of the job they do, the extreme stress they’re under. I wrote a play about it LATER, AFTER and seeing it performed and having old soldiers saying that it was authentic and it moved them, my proudest professional moment.

That’s why I support the charity www.felixfund.org.uk the UK’s bomb disposal charity.

I also have TWO books planned about men who work in EOD – coming in 2018! US Marine Jackson Connor has a tough job to do. He doesn’t need reporter MJ ‘Maggie’ Buckman getting in his way. But MJ’s passion and integrity works its way under Jack’s skin – especially when the people around him are jaded by war.

A story about two people from different worlds. Aimee is eight years old when she meets carnie kid Kestrel. Over the years, friendship grows to something more.

“Kes took me out of my safe little box and showed me the world could be magnificent.”

It’s not easy loving a traveling man and Aimee has some hard decisions to make.

“Maybe magic happens when you let it.” Tucker McCoy is a stunt rider with the carnival. Tera is a senator’s daughter—and the sister of his best friend.

“Stronger men couldn’t have resisted her, and dammit, I’d always been weak.” In one boxed set for the first time

“The word L♥ve burned on his lips…”

You can check out more of