The years had been good to him. When they’d been together three years ago, he was still healing from the wounds he’d gotten overseas. But since then, he’d healed completely and had filled out. His arms were thick and muscular, and she had a feeling if she ever saw him without a shirt, she’d see that he was even more chiseled than he’d been in the past. His brown hair was shorter than when they’d been together before, and he seemed to have a perpetual five o’clock shadow now, which was sexy as all get out.

But it wasn’t just his looks that were slightly different. He seemed even more intense than he’d been back then…if that was possible. His brown eyes were penetrating. Whereas before, he frequently looked away from her when he was talking, as if he felt guilty about something, now he had no problem holding eye contact. All that attention on her made Milena feel as if whatever she was saying was the most important thing he’d ever heard. It was a little discomfiting, but also made her feel all squishy inside.

“And did you?” Sadie asked.

“Did I what?” Milena repeated, not sure what they were talking about as she’d gotten lost in memories of TJ.

“Of course not!” Milena said quickly—maybe a bit too quickly.

“But you want to.” It wasn’t a question.

“No, I don’t.” The look of skepticism was easy to read on Sadie’s face. “Look, he’s just here because he feels guilty or something. And he might be assigned to look after me until Jeremiah and Jonathan are found.”

Sadie shook her head. “I’m sure he does feel some guilt, and he should. He was a dick. But, Milena, he doesn’t have to protect you. The Feds can assign someone else to you. There are thousands of law enforcement officers in this city. Any one of them can protect you.”

Milena blocked out the common sense her friend was using. “He’s arrogant to the nth degree. He strode into the house and practically told me I was his…like a caveman or something. He thinks that throwing money at me and putting me on his insurance will fix everything.”

Sadie shifted until she was lying on her side and her head was propped up by a hand. She was about as different from Milena as she could get. Her dark auburn hair fell messily around her shoulders and her green eyes were piercing in their intensity. She was almost five inches taller than Milena, and slender in a way Milena would never be.

“Let me tell you something about dominant men…once they decide they want something, they’re gonna get it one way or another.” 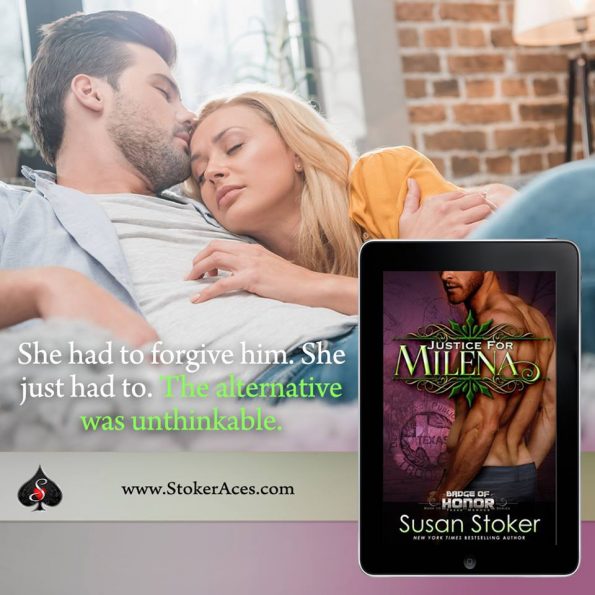