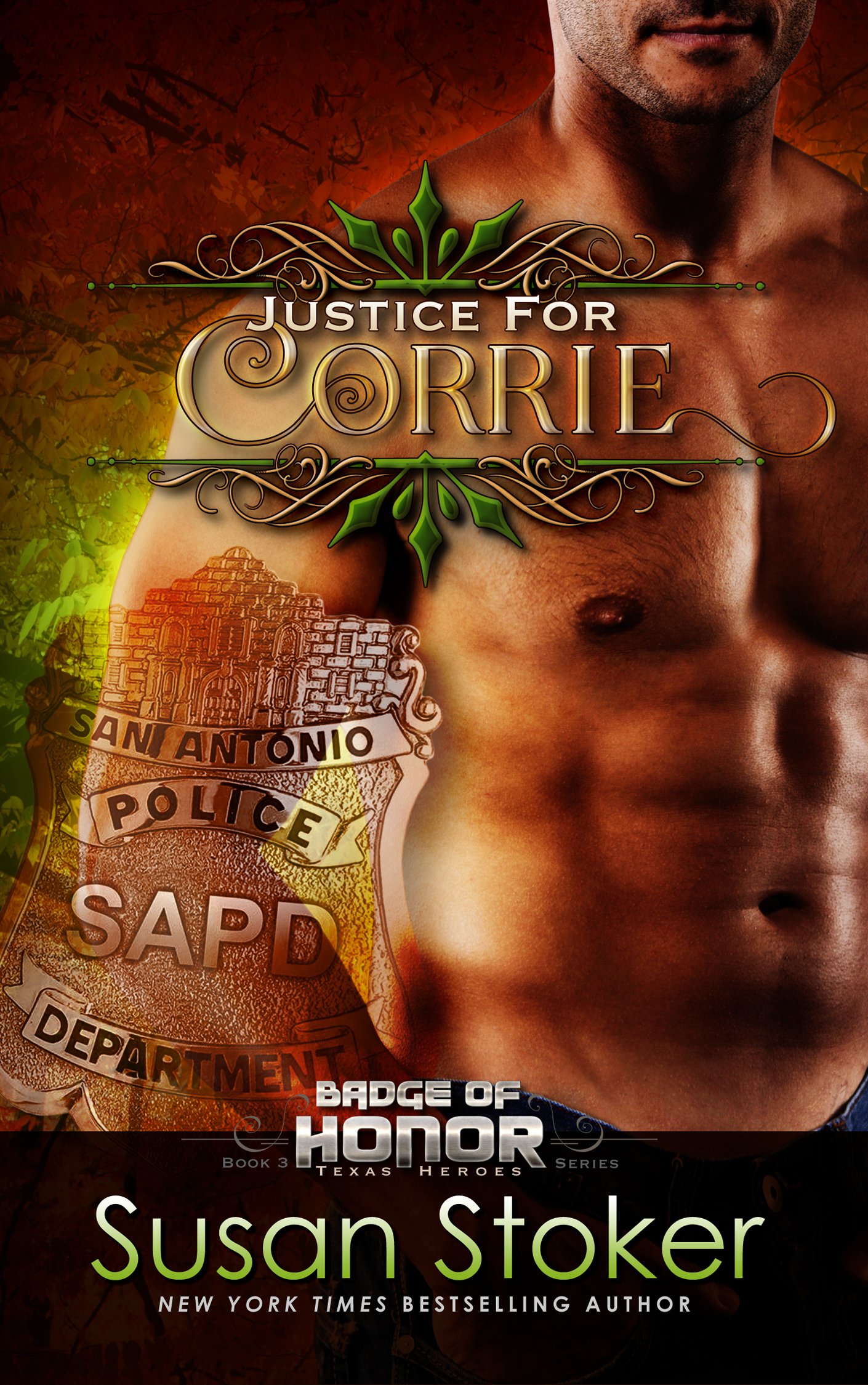 Blind since birth, Corrie Madison relies on her other sharpened senses in her job as a chiropractor. Never did she imagine she’d have to depend on them to identify a killer. But when a man enters her practice, murdering everyone in his path, Corrie is the only witness—putting her directly in the killer’s crosshairs.

Officer Quint Axton wasn’t looking for love, or even a relationship, until he meets Corrie. Beautiful and brave, resilient and intelligent, she’s everything Quint wants—if he can keep her alive long enough to explore their mutual attraction. The threats on Corrie’s life are escalating. Surely a blind person is helpless against a ruthless killer?

Hardly. Corrie is about to prove that disabled does not equal defenseless.

**Justice for Corrie is the 3rd book in the Badge of Honor: Texas Heroes Series. Each book is a stand-alone, with no cliffhanger endings.

Just as Corrie reached for the doorknob to see if she could find Shaun—he usually hung out in the makeshift break room toward the back of the clinic—she heard angry voices in the reception area, followed by a weird popping noise. She froze in her tracks and tilted her head to the side, trying to figure out what was going on.

It wasn’t until she heard Cayley’s scream cut short that Corrie figured out something horrible was happening.

Knowing better than to open her door and try to stop whatever was going on, Corrie stepped quickly away from the door and imagined her office layout in her head. As the popping noises and the screams continued—and got closer to her office—she frantically thought about where she could hide.

Her desk was large, and sat perpendicular to the doorway. She could walk from the door straight to the chair at her desk without having to swerve around any furniture. She kept her office purposely free of extraneous chairs and tables so she didn’t have to worry about tripping over them. She could hide under the desk, but wasn’t that where everyone always hid—and died doing it? If she was a crazy person hell-bent on killing everyone around her, that’s the first place she’d look for stragglers who might be hiding.

The exam door down the hall was opened and Corrie heard Mr. Treadaway ask, “Who are you?” before the awful popping sound came again.

Knowing time was running out, the gunman would be at her office within moments, Corrie made the split-second decision to see if she could fit in the small area under the sink. There was no other place she could hide.

When she’d been hired, there hadn’t been any extra space for her to have an office in the small clinic. A small break room had been converted for her, and the sink and cabinets still lined one wall. It would be a tight fit, an extremely tight fit, but Corrie didn’t hesitate.

Hearing the unsteady gait of someone walking down the hall, Corrie raced over to the sink and opened the cabinet underneath. She shoved her butt in first and wiggled it around, knocking over a few odds and ends that were stored under there in the process. She drew her knees up as close to her chest as she could get them and sighed in relief as she realized she fit, barely. Her neck was bent down at an awkward angle and she couldn’t breathe very well, but Corrie quickly, and quietly, closed one door, then the other, praying whoever was shooting wouldn’t think to look under the sink for anyone.

At the same moment Corrie heard the soft click of the cabinet door to her hiding place engage with the small magnet that kept it shut, she heard her office door burst open.

Because Corrie was blind, her other senses had always been more acute than a sighted person’s. She seemed to hear, smell, and taste what people with no disabilities couldn’t. The man who’d entered her office walked straight to her desk. Corrie heard her desk chair being pulled away. Yup, he’d immediately checked under there to see if someone was hiding from him. She heard him walk to the small window and held her breath.

Corrie never let her circumstance stop her from leading a happy fulfilling life. When her place of work turns into a crime scene; she becomes a valuable witness. Office Quint Axton is fascinated by Corrie, they weren’t looking for love it found them. Can Quint protect Corrie? Can Corrie protect herself?

Corrie and Quint’s story is possibly one of the sweetest and most beautiful heartfelt romances I have ever read. Susan Stoker has not only written and delivered another brilliant book she has brought to the forefront a condition that affects many people and has shown the world it’s possible to not only live a happy and fulfilling life as ‘normal’ as normal can be but that love is out there for everyone.

Corrie was an exceptional person. She was inspiring, strong, loyal, funny and intelligent. She never let anything get in her way to become the woman she wanted to be. She would not allow anything or any person, stop her from achieving her goals or stop her living.

Quint was a gentleman; he was a caring, sweet, funny, strong and protective man. His friends and family meant a lot to him and it was clear to what lengths he would go to for not only them but Corrie’s friends too. He was considerate and adapting to Corrie’s way of life without thinking twice. Nothing was too much trouble and you could feel the appreciation, respect and love he held for Corrie.

This story will have you on the edge of your seat waiting for the bad guys to strike, the suspense will have your heart beating faster with every page to turn, wondering what will happen next and your heart will melt at the love and adoration Corrie and Quint share. Quint will steal your heart and just when you think you can’t possibly have space for another book boyfriend, you will find a space especially for Quint.

I love how Susan Stoker finds a way to bring in characters from her other series. It gives the books something different, something unique that many other books and series don’t. In doing so, Susan also never gives away any huge plot twists from previous books or series. Although in my opinion I highly recommend reading them in order to get full enjoyment from her books.

If you love suspense filled romances with twists and surprises you will not only enjoy the Badge of Honor series you will absolutely love all of Susan Stoker’s books.